A Game of Chicken

The story of how US-China poultry trade went cold for nearly a decade, and why it suddenly re-opened last year.

In November 2019, China lifted its ban on importing US chicken that had been in place since 2015 following a US outbreak of highly pathogenic avian influenza. The agreement to lift the ban was announced before the Phase One trade agreement was reached and signed with China. Although the agreements on chicken were not directly tied to the Phase One deal, provisions agreed to in Phase One, if fully implemented, should strengthen export access for the US chicken industry.

At the same time, the US Department of Agriculture (USDA) announced that Chinese domestic chicken could be exported to the United States if the products were fully cooked, granting China access to the US market for the first time.

The process of China receiving access was more than 15 years in the making. A leader in the US poultry export industry believes bans on US exports were maintained to gain Chinese poultry access to the United States. China may not export much to the United States, but access was a matter of “pride and principle” for China.

To understand why it took so long for the world’s two largest chicken producers to trade with each other again, we have to go back to the beginning.

Disruptions to US-China chicken trade is an old story for US exporters. Chicken exports were caught up in US car and truck tire import policy that choked off US chicken shipments in 2010 after the industry had made significant gains from 2006 to 2009. In 2008, the US shipped more than 750,000 tons of chicken meat, including more than 420,000 tons of chicken paws (chicken feet), a much popular chicken product in China than in the United States. Exports were valued at $682 million, the highest they have ever been. 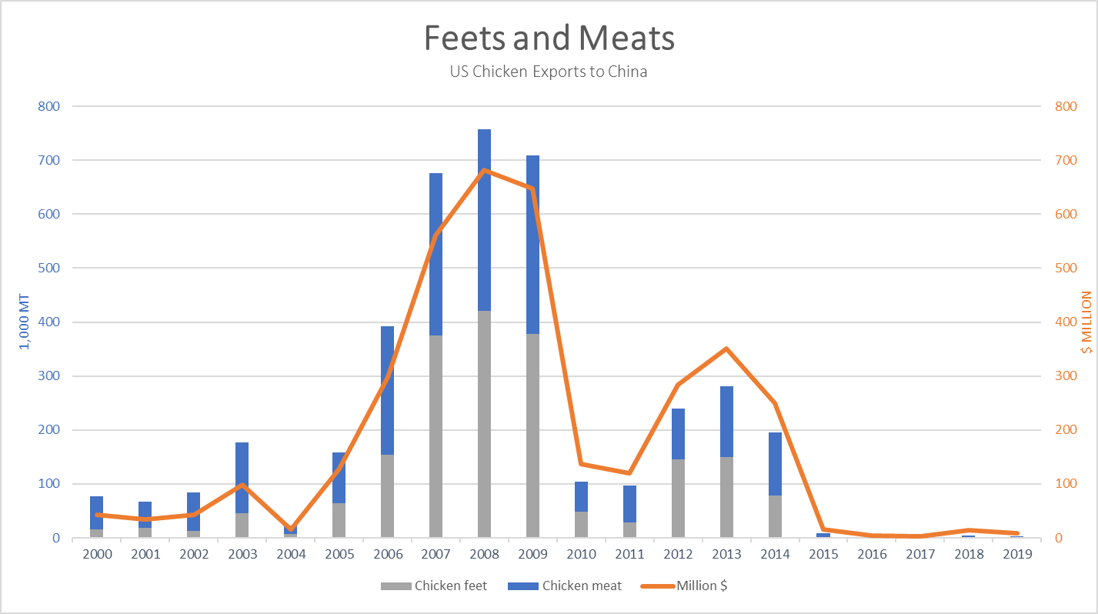 But in 2009, the US International Trade Commission determined that a surge in tire imports was causing market disruptions for US tire makers. This determination allowed the US to increase ad valorem duties on Chinese tire imports as a safeguard measure. China retaliated by imposing antidumping duties upwards of 100 percent and countervailing duties up to 30 percent on US chicken exports, though Chinese officials denied that there was a link these and the tire tariffs. Under this high tariff regime, the flow of US chicken exports significantly slowed for the next several years.

China challenged the US safeguard measures in the World Trade Organization (WTO) but lost. The United States, then, challenged China’s actions and eventually won in January 2018. But by the time the WTO case was determined, US chicken producers were already operating under avian flu bans, diminishing the significance of winning the dispute.

In 2014 and 2015, an avian flu outbreak struck egg-laying and turkey flocks primarily in Iowa and Minnesota, far from major US chicken producing areas. Despite international guidelines, China imposed a nation-wide ban on all US chicken exports, while other markets mostly restricted exports from states affected by the outbreak.

China’s safety approvals were met with objection from the Hill

But before the rule could be implemented, Congress stepped in and prohibited USDA from using appropriated funds to carry out the rule. The congressional prohibition extended through the fiscal year 2009. Congress allowed USDA to implement the rule in 2010, but only under certain conditions that required enhanced auditing and review of the Chinese system, increased re-inspections of imports, and reporting to Congress.

After a long battle to gain market access, China never ended up exporting any processed poultry to the United States…”

How did Congress become involved?

The possibility that the United States could import poultry meat from China has alarmed food safety advocates and some members of Congress because of concerns about relatively lax food safety enforcement in China for both domestically consumed products and exports. Testimony presented to the Congressional-Executive Commission on China at a June 2014 hearing on China’s processed poultry highlighted food safety issues. Later that summer a food safety scandal broke in China as companies were reported to have sold unsanitary meat and poultry. Such stories on Chinese food safety has generated significant concerns among food safety advocates and drawn the attention of some members of Congress. In response to concerns about China’s record on food safety, Section 738 of the enacted appropriations law for 2020 continues to prohibit USDA from using any funds to purchase Chinese raw or processed poultry products for USDA school lunch and school breakfast programs.

What the Phase One deal means for poultry exporters

The US-China Phase One trade agreement includes provisions that could be key to establishing firm footing for future growth in chicken meat trade. In the agreement, China recognized the oversight of US meat and poultry facilities by FSIS, which should facilitate shipments to China, and China retains the right to audit US meat and poultry facilities, in coordination with FSIS and conducted based on risk.

China also agreed to maintain measures that are consistent with international animal health guidelines, which should curtail the use of widespread export bans on US chicken products as occurred in 2015, and ease food safety concerns in Congress. The United States agreed that it would evaluate formal requests from China to consider the avian disease status of regions within China, potentially opening the door to poultry imports on a regional basis instead of using a blanket policy.

However, the Phase One deal did not remove the obstacle of additional “trade war” duties that apply to US chicken meat exports to China. These additional duties, slightly lowered in February, erode US competitive price advantage compared with other exporters even though US products often retain a quality advantage that China’s chicken consumers desire.

Still, the poultry industry believes US chicken paw exports to China alone could reach $1 billion annually, and other chicken meat exports potentially add another $1 billion. According to industry sources, the value of chicken feet as a rendered product in the US domestic market is about $0.05 per pound, but that China will pay closer to $1.00 per pound. The spread of African Swine Fever has devastated Chinese hog herds, cut pork production, and resulted in a gap in protein supplies in China. In light of these circumstances, US chicken exporters have an opportunity to fill part of the protein gap in China in a significant way for the first time in over a decade.

Photo by Julio Reynaldo on Unsplash