Belt and Road in 2019: Recalibration or Retrenchment?

Despite stressors, the most likely course for the Belt and Road this year seems to be one of recalibration. Economic growth in China is not the only engine driving expenditures on the Belt and Road; the program’s political support and significance to Xi Jinping and the CCP could be just as important, if not more so than its economic rationale.

In the hilly north of Myanmar, a Chinese state-owned investment company was prepared to construct a massive 6,000 megawatt dam that would flood an area the size of Singapore. What seemed like a good idea at the time soon became a political debacle. Facing backlash from citizens, then-President Thein Sein was ultimately forced to halt the project.

This was in 2011. In the years that followed, the Chinese government’s requests to continue the project fell on deaf ears. This year, Myanmar formally announced it would suspend the project due to environmental and societal impact.

While the Myitsone dam project predated the Belt and Road Initiative (BRI), it showcased how complicated infrastructure and development projects beyond a country’s own borders can be, and foreshadowed the types of projects that were to come. As BRI moves through its fifth year, it faces arguably more pressure than ever before. 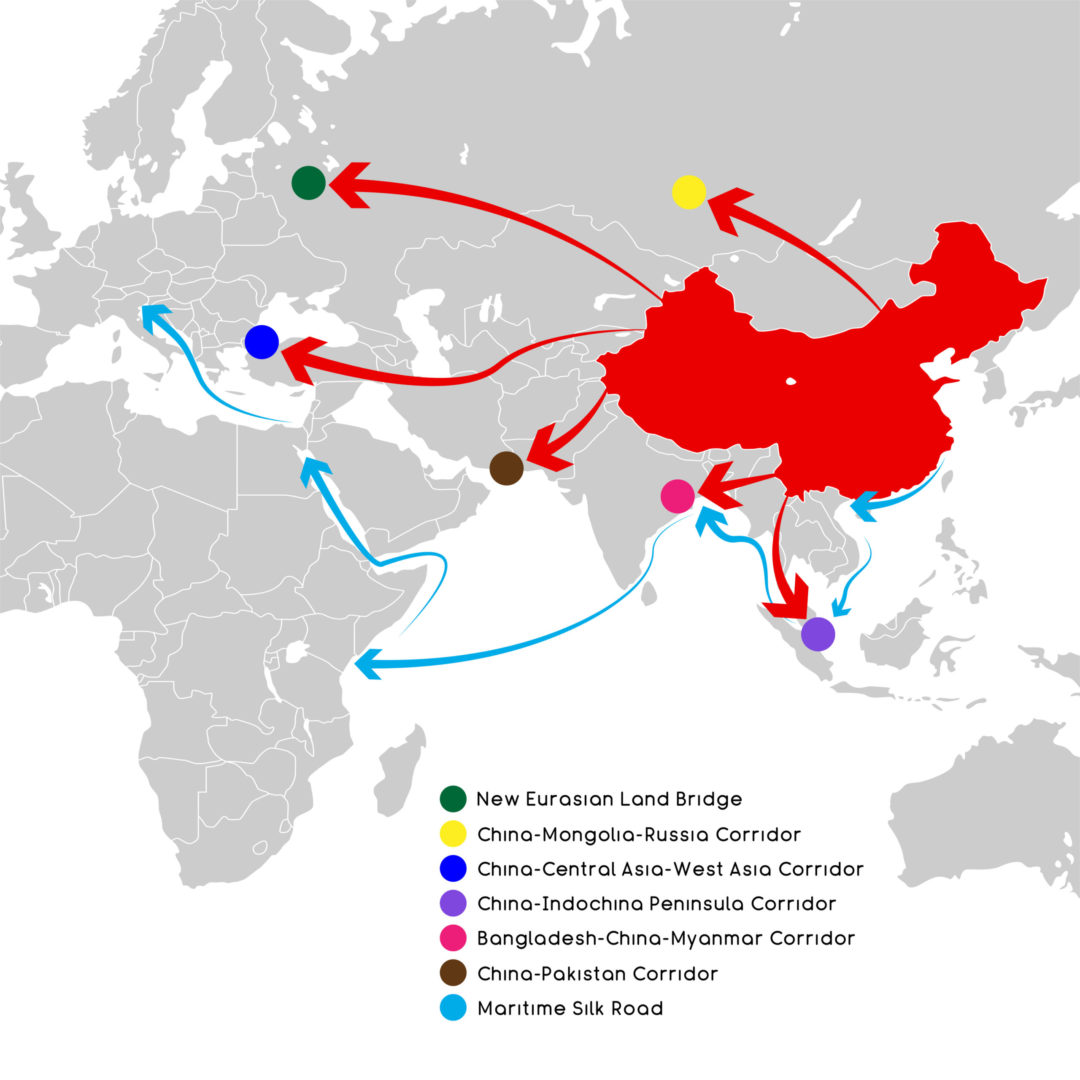 Map of the Belt and Road Initiative via iStock.

Plot twists like these are all too familiar for Chinese President Xi Jinping’s flagship project, and suspended projects are certainly not the only complication.

China’s economy is slowing; fourth quarter GDP in 2018 fell to a nearly three-decade low. Foreign companies are projected to have weaker growth due to softening in the China market and Chinese companies, too, may find themselves harder-pressed to pay their debts. On the domestic political front, recent BRI loans have triggered a “wave of grumbling in China” from citizens who feel those funds would be better spent at home in a country that still defines itself as a developing economy. With economic stressors continuing to grow, how will Xi’s signature initiative to connect Eurasia hold up in the year ahead? One thing is certain: the Belt and Road is not going away.

Headwinds against the Belt and Road

When BRI was first announced, called One Belt One Road at the time, China’s foreign currency reserves stood at some $4 trillion. In an effort to offload pressure on the yuan and provide contracts for Chinese companies, Beijing took an interest in spending some of those reserves overseas. Five years later, reserves have fallen to $3 trillion and hopes that BRI will help internationalize the renminbi now seem far-fetched.

Chinese companies are often heavily saddled with debts that have led a record number into default. As noted in the Financial Times, “big Chinese state-owned enterprises that build, operate, and invest in many BRI projects are—on average—extremely highly leveraged.” In addition, if the fanfare around competitive neutrality from high-level Chinese officials is to be believed, and as more resources are spent to prop up private enterprise, state-owned enterprises (SOEs) may see their access to capital curtailed in the long run. If the cash spigot for these government-backed companies begins to dry up, future BRI projects may fall victim to the drought.

Large SOEs are not the only ones facing economic pressure, though. In recent months, factory activity in China has been steadily contracting, with export orders falling at rates not seen since the financial crisis. At the same time, Chinese companies are facing stress from US tariffs, according to the American Chamber of Commerce. These headwinds for the Chinese economy may begin to whittle away at broad domestic support.

Outside of China, 2018 also saw push-back against BRI from its biggest customers, with some recipient countries reconsidering what once seemed like generous offers from Beijing. A government transition in Malaysia jettisoned several projects and even prompted investigations into the major players that facilitated them. In the Maldives, the electoral defeat of a pro-China president in favor of the more skeptical Ibrahim Mohamed Solih lead to an ongoing renegotiation of BRI-related debt. In Sierra Leone’s capital, Freetown, the cancellation of a planned Chinese-funded airport marked the first termination of a BRI project in Africa. The list goes on.

Non-participating spectators are also pushing back—in some cases, overtly. In October of last year, the Trump Administration rolled out the replacement for the Overseas Private Investment Corporation (OPIC), now called the International Development Finance Corporation. The new entity has a $60 billion budget—double that of OPIC’s—and more importantly, is now able to invest in equity, which boosters argue will make the organization more competitive. The European Union has also shown off a new plan to offer development assistance overseas, though EU High Representative for Foreign Affairs Federica Mogherini claims the move is not in response to BRI, or any other country’s development initiatives, “be it in Beijing, Washington, Moscow, or Timbuktu.” Yet, in March, the European Commission unveiled a new report on the EU-China relationship, which describes China on the record as “an economic competitor in the pursuit of technological leadership, and a systemic rival promoting alternative models of governance.”

Trim the sails, but the course remains unchanged

Despite these stressors, the most likely course for the Belt and Road this year seems to be one of recalibration. Economic growth in China is not the only engine driving expenditures on the Belt and Road; the program’s political support and significance to Xi Jinping and the CCP could be just as important, if not more so than its economic rationale.

Experts maintain that the link between domestic Chinese economic growth and expenditures along BRI is not necessarily strong. Matthew Goodman, a senior scholar at the Center for Strategic and International Studies (CSIS), does not think the basic constraint is “financial capability as produced by economic growth.”

Even if China’s economic slowdown, as it is, shrinks the BRI budget, the impact would not be as catastrophic as the steady stream of ‘worst yet’ numbers might suggest.

Just as any large economy begins to mature, China’s astronomical growth rates will become harder and harder to maintain. As Keith Bradsher points out in the New York Times, “while the figures match historic lows, they show only a small drop from previous periods.”

Economic growth in China is not the only engine driving expenditures on the Belt and Road; the program’s political support and significance to Xi Jinping and the CCP could be just as important, if not more so than its economic rationale.

Although consumer confidence and the manufacturing PMI may look bleak, the initiative still maintains some domestic support. Jonathan Hillman, Director of the Reconnecting Asia Project at CSIS, points out that part of the reason BRI has not flopped is because many of its projects are undertaken domestically, for example, the upgrade to the airport in Urumqi, a major domestic BRI hub in China’s far west Xinjiang Province. Belt and Road projects also offer a pressure release valve for economic unrest, as workers from China’s Rust Belt are sometimes able to find work on construction projects dotting the landscapes of participant countries.

This wide range of economic phenomena all have an impact on BRI, but they do not capture the whole story.

Dr. Wen Wang, Executive Dean of Chongyang Institute of Financial Studies at Renmin University of China, feels that the relationship between China’s economic growth and funding provided to BRI nations is merely one of a kaleidoscope of factors determining the BRI budget. To that point, he says “the relationship between the participating countries and China, the level of the country’s economic development, and the actual demand for foreign investment” play larger roles in determining investment levels.

In a state capitalist system like China’s, it can be difficult to disentangle the economic from the political. Although the project is often described in economic language, with new projects touted in state media for their great value, BRI’s political value is central to its continuation. It has been referred to as the “practical embodiment of [Xi Jinping’s] ‘China Dream’” and a centerpiece of his foreign policy thinking. CSIS’s Christopher Johnson has written at length on the topic of BRI’s place within the CCP’s evolving foreign policy outlook, calling it “comprehensive, focused, and personal to President Xi.”

To that end, President Xi recently experienced a major victory when Italy decided to join, becoming the first G7 nation to sign on. During the same trip to Europe, Xi stopped in Paris to meet with a more skeptical Emmanuel Macron, but still walked away with over a dozen commercial deals worth tens of billions of euros.

Goodman notes that “certainly, [the government has] reined in BRI in the last year or so and that trend of consolidation is likely to continue for the period ahead.” But that doesn’t mean that anyone should be buying lilies for BRI’s grave anytime soon. Now a central element of Xi’s legacy, the chances of the campaign being axed any time soon are slim.

Goodman pointed out that China “still [has] a fairly significant pool of capital that they could deploy to this initiative if they wanted to,” adding that “at some point, longer term, if they’re only creating white elephants and things that are not generating a real return, that is going to pinch. But I don’t think that’s a constraint on the macro-level in the near term.” Xiaosong Wang, a professor of Economics at Renmin University of China agrees that “because the central government’s established policy remains unchanged, and the overall economics of supporting the Belt and Road Initiative are positive, then concrete measures will not undergo fundamental changes, and the pace of the Belt and Road Initiative will not stop.”

The Chinese government has arguably been making its own case for a continued, if better-targeted Belt and Road. At the Forum on China-Africa Cooperation last September, Xi Jinping told African leaders that Chinese investment dollars “are not to be spent on any vanity projects, but in places where they count the most.” An article in the People’s Daily touting the overseas employment benefits of the Belt and Road also spoke of the importance of working to “build a responsible brand.” Professor Yuen Yuen Ang of the University of Michigan, agrees, but expects that “Chinese policymakers [will] exercise more selectivity and caution going forward both because of economic constraints and backlash against the BRI.”

If that is the case, opportunities may arise for foreign companies to fill those gaps. Given the current political environment in the United States, it seems possible that American companies could find support from the Trump Administration for more overseas investment if it was portrayed as eating China’s lunch.

Chinese officials have signaled their own interest in more American and foreign participation in BRI, lyrically professing that “China is not singing solo, but in a chorus of countries along the Belt and Road.”

In a search for more responsible projects, increased American and foreign cooperation could offer a more sustainable path forward. The additional know-how, technical expertise, and experience in overseas markets could aid in everything from site selection to the provision of technical components that would make projects safer and more reliable. Perhaps such participation could even prevent quagmires like the Myitsone dam project.

Unsourced quotations are drawn from interviews with the author.