The Handshake that Changed the World

Forty-seven years ago today, Nixon grasped the hand of Chinese Premier Zhou Enlai, an image that represented a sea change in foreign relations for the two countries. Lesser known, however, is the story of how those images were captured and broadcast around the world. Robert Siegenthaler, the head of the TV network pool covering the visit, shares his story with CBR.

It was shortly before President Nixon’s visit to China in February 1972. White House officials were worried about a handshake.

But Robert Siegenthaler, the ABC News executive and head of the three-network pool tasked with sending live photos of the visit to millions of living room TVs across the United States and world, had other things on his mind. “I was worried about making sure Air Force One stopped at the prearranged spot on the tarmac at the Beijing airport so that the one camera we were allowed to have there could capture the arrival,” said Siegenthaler, remembering vividly the events of 47 years ago, which opened the door to a myriad of cultural, student, and business exchanges.

Now 85 and retired, he lives with his wife in rural Maine, where he took a moment to reminisce for the China Business Review.

The White House may have been worried about a handshake between Nixon and Chinese Premier Zhou Enlai, but Siegenthaler was losing sleep over whether the only picture available would be of Air Force One’s latrines being emptied through a vacuum beneath the plane—with Nixon and his host departing unseen in their Russian-made ZiL limousines. 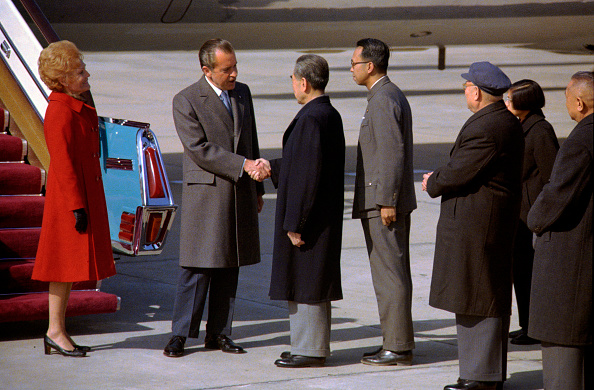 At at the foot of Air Force One’s airstair, US President Richard Nixon shakes hands with Premier of the People’s Republic of China Zhou Enlai, Beijing, China, February 21, 1972.

Anxieties about the handshake were not trivial. Aides responsible for the optics of the visit pointed to an incident in Switzerland years before when then-Secretary of State John Foster Dulles refused to shake Zhou’s hand, reportedly telling aides that they would only meet in a car crash. Nixon, according to Siegenthaler, saw the handshake as a talisman for the entire visit. A cold shoulder would signal doom for Nixon’s high hopes.

When the time came, he reached for Zhou’s hand and received a hearty clasp in response.

Prior to the shake seen around the world, Nixon fretted over the TV coverage, writing in his memoirs that a “picture is worth 10,000 words.”

Then-National Security Advisor Henry Kissinger, who had secretly met with Chinese officials to plan the trip, had been instructed to maximize publicity. He was reportedly told by Nixon’s chief of staff H.R. Haldeman to secure the most flattering angles for the president—the more cameras, the better. In addition to the three American TV networks, the White House credentialed more TV and radio correspondents than print reporters. A New York Times article before the trip even groused that the balance tipped much too far in favor of television.

“The more cameras, the better.”

Siegenthaler, quoted in the article, scoffed at the notion that the networks were being used for political purposes; “I don’t know who the Chinese TV people report to, but I don’t report to the US Government.” More important than who from what news agency was invited was the enormous pressure to get the TV coverage right. It needed to be flawless.

As it happened, Air Force One parked exactly as directed and Nixon walked from the airplane’s door into the chilly February day. Americans and people around the world woke to what, for some, were surreal images of once seemingly implacable foes smiling, toasting, celebrating. A lesson in realpolitik. Siegenthaler received this message from his network bosses: “You’ve got a hit! Yay.”

So much of a hit, in fact, that Siegenthaler, towing 25 tons of equipment including a portable satellite earth station leased by the Chinese from a US supplier, and with 60 American technicians, was asked to provide 50 hours of video to the eager-to-consume news producers at ABC, CBS, and NBC. The work included hours of painstaking negotiations with their Chinese counterparts.

Siegenthaler said the Chinese requested extensive plans for everything. “Trouble is, we didn’t have such plans because the very nature of live television is based on an understanding that things don’t go according to plan. Culturally, there was no ad libbing. Everything had to be painstakingly negotiated with approvals sought from superiors.”

And even when there was a semblance of a plan, authorities could squash it.

When the American media found out that Nixon would walk on the Great Wall, located some distance from Beijing, they asked for permission to cover it live. Their request was rejected for “technical reasons.” Recalling the incident, Siegenthaler said, “I blew my top. My engineering people told me they could do it.” Next thing he knew, a new Chinese liaison was assigned to the team and Siegenthaler got permission to at least videotape Nixon walking on the Great Wall. It became one of the more potent images of the trip. But the entire endeavor nearly went horribly wrong. 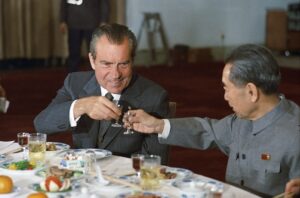 During a run-through before Nixon arrived in Beijing, the Chinese said that video transmission tests had been conducted and that all of the equipment worked. But Siegenthaler knew it did not. He suspected, rightly so, that the tests hadn’t included the complex journey that the video and audio signals took from the airport, to the satellite, to the receiving station in California, then by underground cable to New York, where they were split into separate feeds and routed to the three networks.

In China, the networks “pooled” their equipment and technical personnel under Siegenthaler’s direction. Alarmed that inadequate testing could contribute to a technical disaster, Siegenthaler even told his Chinese counterpart, “The hell with it. We won’t do it at all.”

Everyone involved worked long hours with little sleep. Meetings often started after midnight and lasted into early morning. Novel solutions were developed to deal with fatigue, stress, and misunderstanding. “Frequently, we puzzled each other in dialogue, but when a person from either side over-spoke, it was best to say, ‘have a tangerine,’ which filled bowls on every coffee table, and which could be chewed while one tried to figure out what the other person was trying to say.” Siegenthaler was surprised one day to see the side of the aircraft chartered to haul the networks’ equipment. It was painted, “The Golden Tangerine.”

Faced with everything unraveling before an international audience, the testing went forward successfully.

Bonds did grow between both media teams, strengthened by high TV ratings in the United States and China. As the end of the week drew near, it was suggested that live TV coverage of Nixon’s departure from China via Shanghai be provided. Siegenthaler’s crew decamped for the South where they sent back more memorable footage. “There’s no way in hell that should have worked with such short notice. But it did.”

Nixon’s farewell wave was captured for posterity, a perfect bookend to what seemed like a perfect story.

An exhausted Siegenthaler was routed back to the United States via Honolulu, where he was put up in a five-room suite as a token of appreciation from grateful bosses at ABC. He was only there for nine hours before heading back to New York. “The only room I saw was the bedroom.”

“There’s no way in hell that should have worked with such short notice. But it did.”

Siegenthaler went on to become vice president of special events, executive producer of World News Tonight and president of broadcast operations—all with ABC News. In retirement, he and his wife visited Beijing a few years ago during a trip to Mongolia. He was amazed at the changes there since his first visit. He’ll leave analysis of the current bilateral relationship to others.

There has been no shortage of commentary during the last almost-five decades. Nixon famously reflected that his visit was the seven days that changed the world. Experts have argued that his visit prevented a war with China, while others claim it made a future war more inevitable.

Nixon’s own comments all those years ago sound prescient: If we didn’t find a way to talk, China and the United States would be on “a very, very serious” collision course. These days, we’re still talking, but a potential collision looms. Mao, Nixon, Zhou, and many other players are long gone. China and the United States have had almost a half century to talk; but mutual understanding and negotiation of each nation’s strategic goals have been elusive.

Nixon was concerned about defusing tensions with a nuclear-armed China, capitalizing on a Sino-Soviet split, and enlisting China’s help with ending the Vietnam War. Today, the United States and China are clashing over trade, cyber espionage, and China’s efforts to expand its spheres of influence within Asia and beyond.

Perhaps it’s time to share a bowl of tangerines and recall days long ago when an unexpected visit changed history.