Will China Fold on Structural Issues? An Algorithm says not any Time Soon.

Want to predict China’s policy changes? A new machine learning algorithm, called the Policy Change Index (PCI) for China, looks at the state-run paper People’s Daily and is a leading indicator of China’s policy shifts from 1951 to the most recent quarter.

As top-level trade negotiations between the United States and China continue, expectations are heightened that the two sides will forge a deal to end the fight. Fueling this optimism is a narrative on the American side that the Chinese economy is suffering predominantly from the trade war and, hence, China is desperate to end it by making a major concession to the US.

If the concession means “Buy (a Lot More of) America,” maybe. But if it involves backing down on thorny structural issues—such as technology transfer, intellectual property protection, and state subsidies for domestic firms—it may be a hype that’s too much, too soon.

The slowdown of China’s economic growth has little to do with the trade war. It’s a consequence of China’s development model that took shape during Former President Hu Jintao’s administration. The structural issues on which America is demanding change are essential components of this model, and there’s no sign that China will deviate from it anytime soon.

We make these claims not as China watchers—although we are—but as developers of a machine learning algorithm that’s able to analyze the Chinese government’s agenda and predict its future direction.

How the algorithm works

The program we have developed predicts China’s policy changes by analyzing an unusual data source: its official newspaper, the People’s Daily. The output of the algorithm, which we call the Policy Change Index (PCI) for China, is a leading indicator of China’s policy shifts from 1951 to the most recent quarter.

Predicting policy changes using government pronouncements works in this context because of the Leninist nature of China’s political system. According to this long-held tradition, agitation and propaganda precede the implementation of planned policies because they serve the purpose of “educating” the public. This means that when the official newspaper alters the way it propagates policy issues—which modern-day machine learning tools can detect—it’s an indication that actual policies will change later on.

To detect changes in propaganda, the program mimics the mind of an avid People’s Daily reader and learns which topics “should” appear on the front page—a proxy for content the editor, and the Chinese government, deem most important. But what we are really interested in is: After the algorithm has trained itself with, say, five years’ worth of articles, how well would its educated guess do on the articles published in the next quarter?

The answer depends on what happens in that quarter. If the newspaper does not change the way it propagates policy issues from the previous five years, the algorithm’s educated guess would work just as well. But if the headlines turn out very different from the PCI’s guess, it would suggest that the newspaper, and the Chinese government, have fundamentally altered their priorities, throwing the algorithm off-balance.

A drastic increase in the index below indicates a policy change. The PCI not only has retroactively “predicted” many watershed moments in the Chinese economy in the past decades, but is also able to make short-term policy forecasts in the future. For US businesses, the outlook is not so peachy. 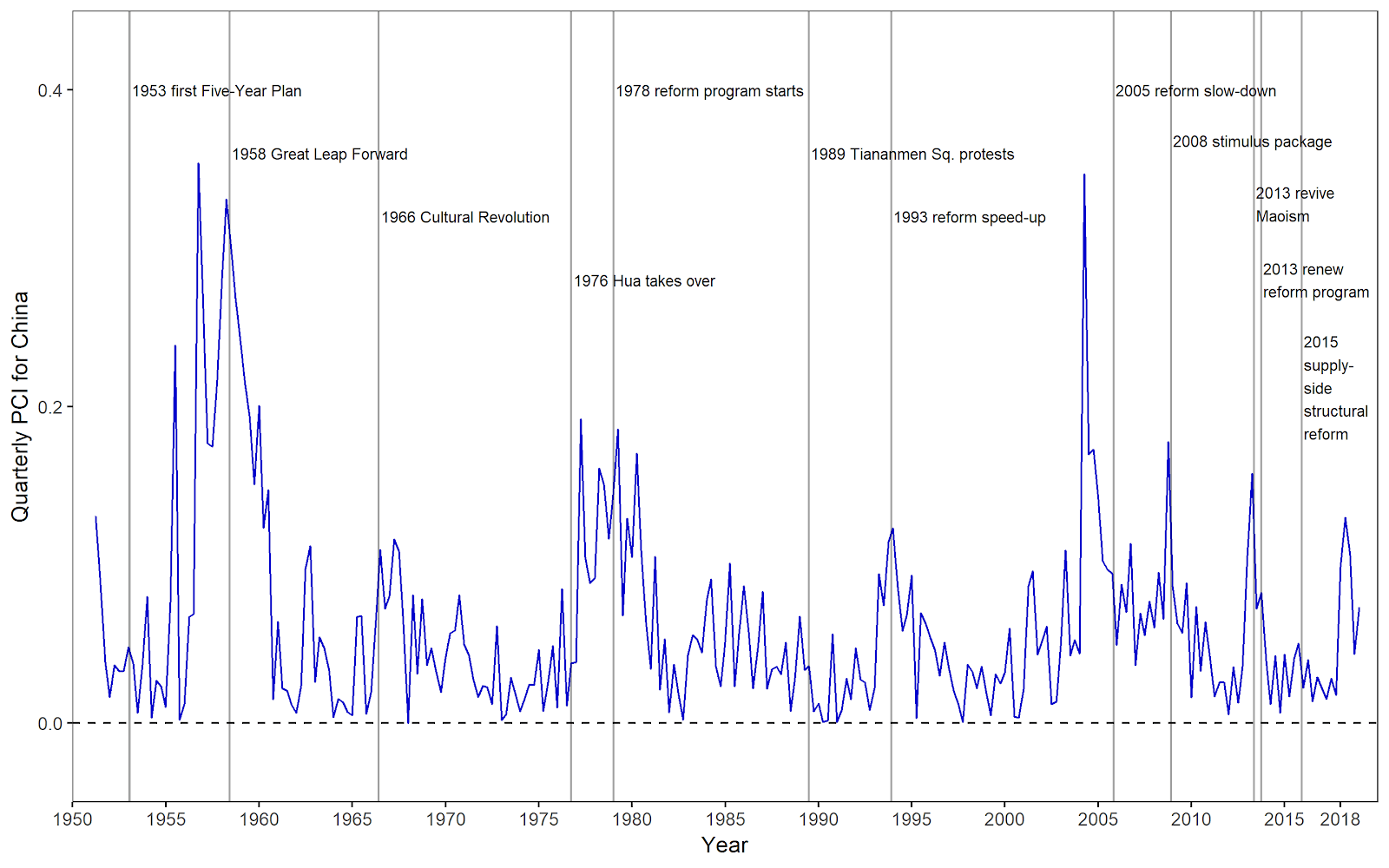 Noticeably, the index shows a spike in early 2018, which, by the PCI design, suggests a future policy change—but not the change the US business community is hoping for. 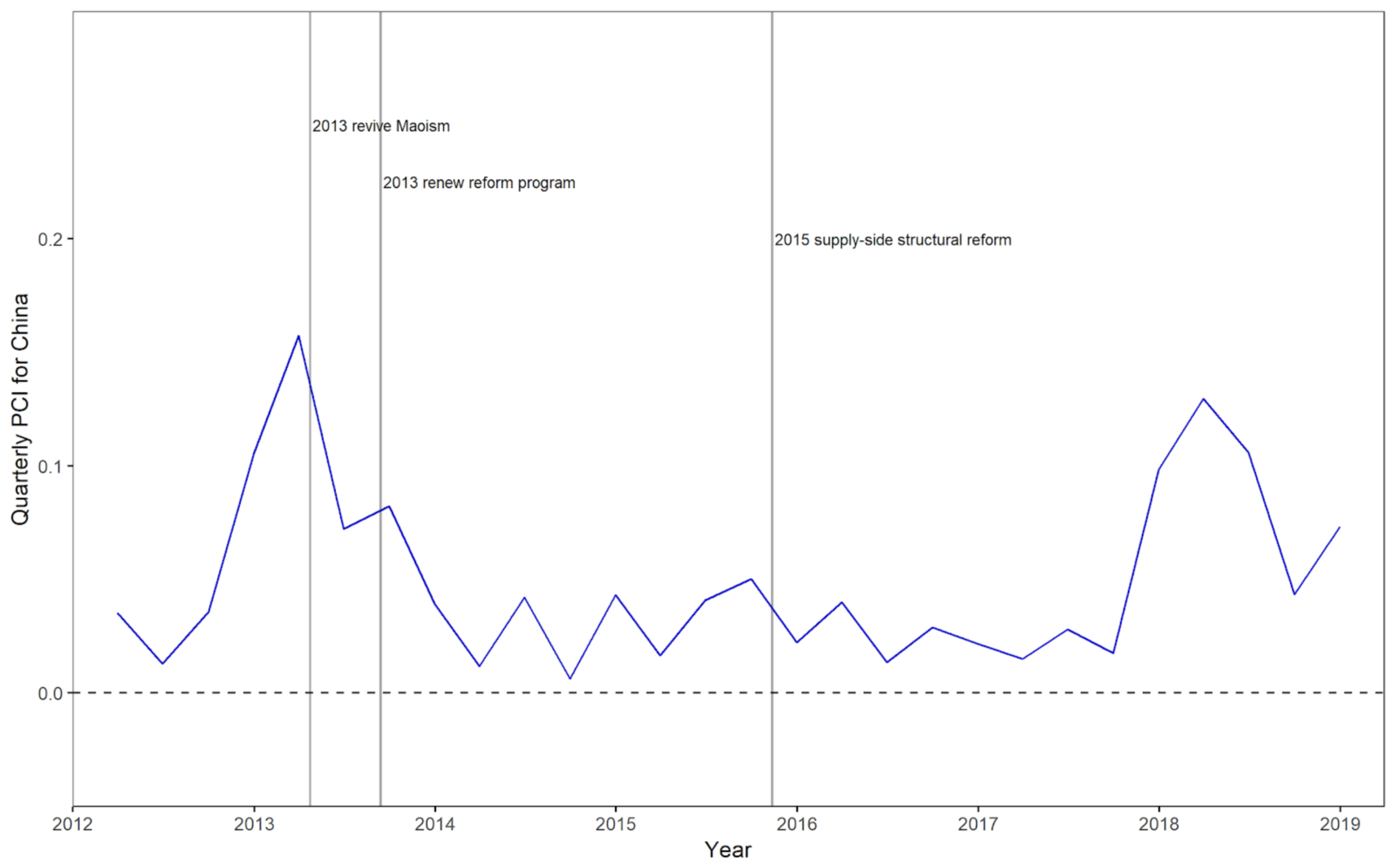 Quarterly PCI and Major Policy Changes in China under Xi

Reviewing People’s Daily articles during this period helps delineate where the algorithm has made mistakes. At the time, the unexpected policy changes fell into three broad categories, all aggressive, nationalist measures under President Xi Jinping.

All of these measures run counter to the type of policies that would lead to structural changes the United States wants to see in a trade deal.

You might be thinking that back in early 2018, the trade war had not started yet, which would be correct. But if China was to signal a policy change toward making those concessions, it would have shown up in the PCI during the rest of the year, which is not the case. In other words, the lack of another spike after early 2018 suggests that China is still on the path of all-out aggression.

To train a good PCI model to pick out front-page articles, it requires the government to have a clear agenda. But that’s not always the case. When the government has conflicting priorities, the average person would be confused, let alone an algorithm.

The Chinese economy was brought to such a state of policy confusion when Hu launched his “harmonious society” initiative in early 2005—a policy change predicted by the PCI uptick in early 2004. It attempted to maintain economic reforms and further open China’s economy while also using government intervention to solve a variety of social problems such as unemployment, poverty, and regional disparities. These interventionist measures were contradictory to economic reforms precisely because they are interventionist.

The half-hearted reform path started by Hu can be seen in the figure below, which shows how well the model for each quarter is trained in constructing the PCI for China. The algorithm’s performance has been relatively low since the launch of the “harmonious society,” reflecting the internal contradiction of the initiative. That the performance has not recovered under Xi also suggests that China’s economic model has largely stayed the same. 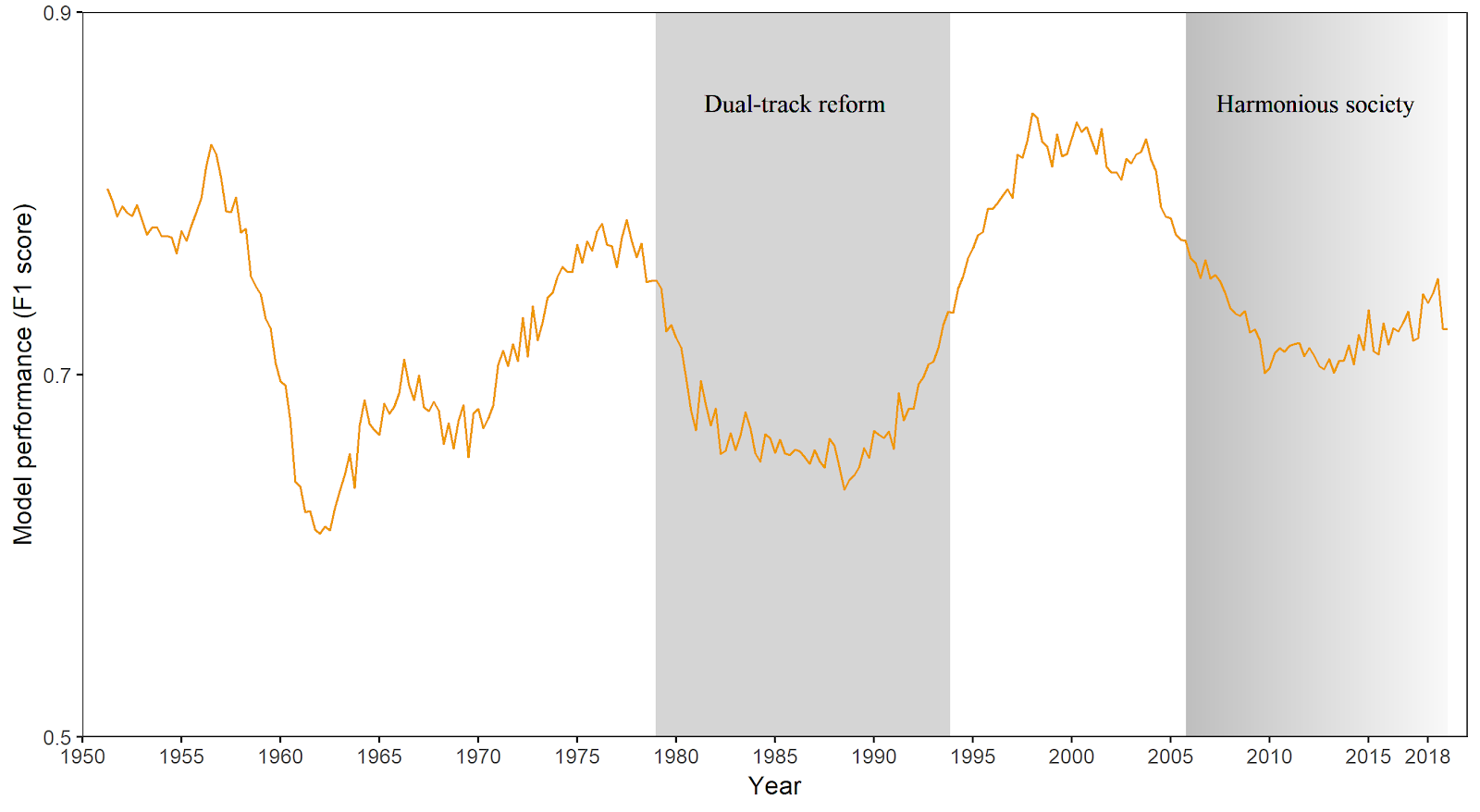 Interestingly, the last time the algorithm had a low performance was when China was experiencing “dual-track reform” from the late 1970s to the early 1990s. As its name suggests, the policy upheld the state sector and central planning while allowing private businesses to burgeon in markets. That period of policy confusion also lasted 15 years, until Deng Xiaoping broke the dilemma with his famous Southern Tour of 1992, advocating for full-blown market reform.

When will China break its current policy dilemma? While the PCI framework provides an approach to predict policy change by detecting propaganda change, we do not yet have a theory that can predict propaganda change itself. The current trade war with the United States has had little impact China’s economic slowdown. There is no sign that it will break China’s policy dilemma either.

Though cliché, we are compelled to say only time can tell.

Julian TszKin Chan is a senior economist at Bates White Economic Consulting. Weifeng Zhong is a research fellow in economic policy studies at the American Enterprise Institute. The views expressed here are solely those of the authors and do not represent the views of the American Enterprise Institute, Bates White Economic Consulting, or their other employees.